It’s hard to imagine life without something as simple as pavement markings. Whether it be designated lanes on a main road or neatly marked spaces in a parking lot, these lines have saved us from a lot of confusion!

In this post, we’ll take a look at the history of pavement markings and how they came to be such an important detail in keeping parking lots safe and organized.

The History of Parking Lots

Before automobiles were introduced in America, there were little to no parking regulations, let alone traffic rules in general. It wasn’t until Ford General Motors’ accessible Model-T hit the market in the early 1900s that vehicles were in full force on the road.

Of course, more cars inevitably meant more problems! Vehicles were being left unattended on streets. Plus, the lack of traffic regulations were causing hazardous accidents among drivers and pedestrians, as well as traffic jams.

It wasn’t long before traffic ordinances were put in place for large cities like New York, London, and Paris. But what about parking?

Around the 1920s, parking lots started showing up in big cities all across America. Some were for commercial businesses while others were for private operators. Local governments saw it necessary to lease these vacant lots out to people in order to keep unoperated vehicles off the street.

These lots would allow people to leave their vehicles unattended for long periods of time while they went about their business or enjoyed a show at the theatre. Most of these lots were supervised and cars were left at the entrance of the lot to be parked by an attendant.

The idea of marking surfaces with a contrast color to organize flowing traffic can be dated back to ancient Rome where bricks, stones, walls, shrubs, and other objects were used to separate lanes into opposite directions.

As people began to utilize transportation more and more, parking became an important necessity. Some of the earliest parking spaces were used for horses and stagecoaches back in the 1400s. Horses were tied to posts and lined up in similar fashion to how we park cars today.

The idea for marking pavement with paint is believed to have first debuted in Michigan in 1911 when a leaky milk wagon left a trail of white behind on the road. This allegedly sparked the idea of painting lines on dangerous roads prone to accidents.

Doctor June McCarroll is also credited for helping introduce roadway lines when in 1917 she was driven off the road by a ten-ton truck. McCarroll presented the idea of separating lanes with paint to her local chamber of commerce. Although it wasn’t approved, this didn’t stop her from painting a line down the middle of the road herself!

There are many others who advocated for roadway lines throughout history. Overtime, most states, towns, and counties followed suit. However, markings and colors weren’t consistent, which was confusing to traveling motorists. So, in 1971, new guidelines were released that made all states use the same safety markings.

Striping parking lots over the years proved to be beneficial. Not only could people distinguish where to park in a way that was efficient, but attendants were no longer needed to park vehicles and keep lots safe since these markings did the communication for them.

Not to mention many people found striped parking lots aesthetically pleasing and inviting!

Striping Innovations and Beyond

Parking lot striping and stenciling has become quite advanced with custom designs available for businesses who are looking to enhance their lot with branding messages, to-go and curbside pickup, drive through directional arrows, and so much more.

Some of the first pavement markings may have been painted by hand, but that’s certainly not the case anymore! Today, you’ll find bright, long-lasting lines on roads and parking lots that are perfectly placed thanks to the help of laser guided machines.

We’re proud to continue in the advancement of pavement striping with our state-of-the-art equipment. We happily go above and beyond for our customers – whether it be for projects like installing a new layout for a parking lot or re-striping an existing one.

Looking to start your own parking lot striping company? Set yourself up for success with a 1-800-STRIPER franchise! Contact 1-800-323-4700 or visit 1800striperfranchise.com to learn more. 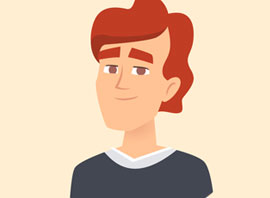 Great Company, good pricing, good quality work and even better customer service. I have always used and will continue to use in the future. If you want the job done right use 1-800-STRIPER

They are very responsive and complete the work in a timely fashion. I have used them for 18 years and have never had any issue with their work. Very highly recommended. 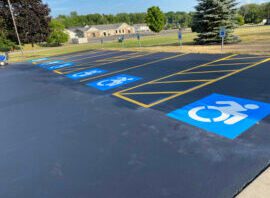 1-800-STRIPER is THE company that you want to use when you need pavement marking done the right way. 1-800-STRIPER always gets back to me when I call and answers my questions clearly and do the extra steps that are needed to clarify what needs to be done on each job. Jobs are completed on a timely basis and with great results – no overspray or sloppy lines. I have worked with 1-800-STRIPER for over a decade now and do not call anyone else. All business is handled professionally and at reasonable pricing. 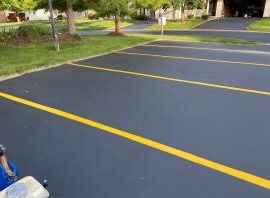 We have been working with 1-800-STRIPER for eight years. They are very easy to work with and have a highest level of attention to detail. They are very knowledgeable, and passionate about parking lot striping. Their quality of work is outstanding! They have helped us serve the Rochester community for many years. I would highly recommend them!